Santiago foundation is a charity foundation that has been established with the ambition to raise money that will be donated to projects benefiting school children in the Philippines. Our vision is to make sure that the children are able to define their own future and give them the opportunity we believe is within every child’s rights.

A storm coming in

During the first week of November 2013 the storm-hardened people of the more than 1,000 islands of the Philippines hardly noticed that a tropical depression had formed several thousand miles away in the Pacific Ocean.

Over the unusually warm waters the storm named Haiyan grew into a monster – a superthyphoon with sustained winds of 195 miles/hr (315 km/h), surpassing Hurricane Camille in Texas 1969 as the strongest storm ever recorded at landfall. In the morning hours of November 8th, Haiyan made landfall on the Island of Leyte with the eye of the storm centered over the City of Tacloban, the capital of Leyte with some 250,000 inhabitants. 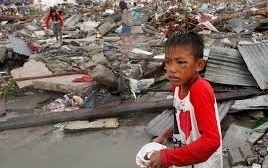 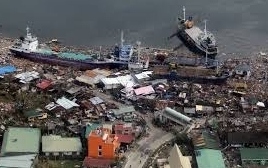 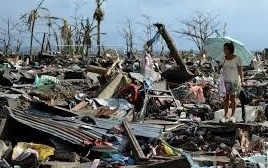 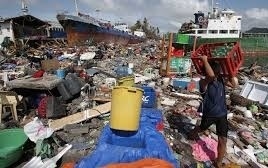 These pictures were taken in Tacloban, city after the storm.

The Philippine Weather Service gave Haiyan a second name – and Yolanda is now the only name used in the disaster relief work. Having two names is appropriate considering that we are dealing with the strongest typhoon ever and a storm surge which surpassed the waves produced by the powerful Tsunami on Boxing Day 2004 which totally devastated northern Sumatra and coastal areas of Thailand.

The storm surge, which measured more than 7 meters, washed away everything in its path along the coastal areas south of Tacloban City, with water and debris effectively bulldozing all structures. The luxurious 5-star Oriental Leyte Hotel with its idyllic beach location next to one of the most famous landmarks from WWII – MacArthur Landing Memorial – was completely destroyed leaving only the concrete walls standing.

Initial reports told the world of the devastation and of the thousands of fatalities and injuries in the path of the storm. Niels, who is the CEO of a shipping company with a lot of Philippino employees, was greatly concerned for the safety and wellbeing of the crew and their families in the affected areas. Many hours were spent on the phone from the ships trying to speak to and comfort loved ones at home. After 2 weeks they were able to pass on the message to all our ships and crew that their families were all safe.

After a storm comes relief, rebuilding and trying to get food and water to survive the day. Less than 48 hours after the storm had passed British and other navy ships arrived with food, water, blankets and other essential relief material, and they were quickly followed by UNHCR, UNICEF, Red Cross and other agencies.

Once the initial emergency relief efforts were over and the long-term rebuilding phase took over, Niels and his wife Åsa decided to visit the affected families, listen to their stories and try to offer support and comfort.

February 21 Niels and Åsa arrived in Tacloban. After having lived through Hurricane Andrew in Miami 1992 and several powerful Hurricanes in the Bahamas they had some idea of what kind of damage we could expect to see from the wind. But they were totally unprepared for the extent of the damage from the storm surge and especially how much work is left to do before the city will be back to normal.

After having spent some time in Tacloban, Niels and Åsa continued a 4 hour drive across the Island to a small village called Palompon. During the stay in Palompon Niels and Åsa met with officers from the shipping company and their families who shared their stories from Yolanda. Niels knew that two of the sisters were teachers in poor school up in the mountains and asked how much they had lost during the storm, they replied: “nothing – they did not have anything to lose”. This became the spark that eventually started the help for the school and the beginning of the foundation.

The sisters home, which they shared with 2nd officer Ronald Sios-e, had sustained damage, but with help from family and friends they had managed to make temporary repairs and live in the house with their new addition to the family, a baby girl, born only 8 weeks before the storm.

Words cannot describe what Niels and Åsa saw more than 100 days after the storm. The pictures only give part of the story.

The trip to Leyte after Yolanda had a great impact on both Niels and Åsa. It is impossible to fully comprehend what these families have been through. Both Niels and Åsa were greatly concerned of the stories they had taken part of after the visit and felt that they wanted to contribute to the affected families. They therefore decided to establish the Santiago Foundation together with a colleague of Niels’s named Sofia.

The foundation was formally established during 2016 and has accomplished a lot since then. You can read more about the work we have done during the past years under ”Our Work”.

We are very grateful for all the support from our donors.  Thanks to their financial support we have been able to accomplish many things and improved the quality of life and for the schoolchildren to become better students.

Our work thus far include:

Feeding program at Santiago Elementary School has been going on continuously since the summer 2016 to provide both kids and teachers with hot lunches during the weeks. Experienced staff ensures that the meals are nutritious and tasty – typical dishes include local favorites such as Chicken stew and Chicken adobo. In addition to the meals all the kids received their own Crew Chart lunch box for Christmas.

It soon became clear to us that Building a new kitchen was a much needed improvement, especially since the open fire created smoke in the eyes of our volunteers was becoming a health hazard. We worked with a local contractor to get a building permit and the new kitchen building was completed in about two months and opened end of March this year during our most recent visit.

During our many visits to the school we had observed the need for Proper shoes for all the children and all the teachers. The teachers made a great effort in figuring out the sizes and new sturdy everyday shoes were delivered to all earlier this year.

Already during our first visit to the school we discussed the need for a proper Medical examination and evaluation of all the kids followed by immunization etc. as required based on their examinations. This was made possible with the help of our preferred medical clinic in Manila, Halcyon, who sent down a doctor and a nurse team.

The kids have free time for sports etc. but no facilities. Therefore we decided together with the teachers to Build a basketball court on the grounds using the remaining concrete blocks of a building that was destroyed in Typhoon Yolanda. Construction started in April 2017 and the court is now in use. Crew Chart´s (Niels’ shipping company) own Ressel Hernandez, who is an experienced basketball player & coach, spent two days together with his family in Palompon and participated in the official opening ceremony of the basketball court as well as holding several clinics.

During January 2018 we had a successful Shoe collection program in Sweden. Many parents and kids from local sports clubs, HGH and Kustens IF, from the Halmstad area in Sweden had collected and donated shoes which were hand carried and distributed to the kids.

A new goal for 2018 was to find ways to improve the dental status and hygiene among all the kids. We were very pleased to bring our new partner, Dentists without Borders, represented by Magnus Sturebrand who wasted no time and performed a check-up on all the kids.

We have accomplished much with help from our contributors but we have a lot more to do and we are depending on our donors. You will find information about how to make a donation under “Support Us”.

Your support is crucial for the future work of our charity foundation. You can be sure that your donation goes 100% to the school and the children as we have no overhead costs. And remember – every dollar, krona or peso makes a difference.

Santiago Foundation collaborates with
several partners around the world.